Hello! Today I thought that I would share with you all some books that I have recently read. They are books 1 and 2 in a companion series by contemporary author Stephanie Perkins. For those of you who do not know what a companion series is, it is a group of books that share similarities such as setting, character or themes. This is a three-part companion series. I am only going to review the first two books as I have yet to read the last installment. 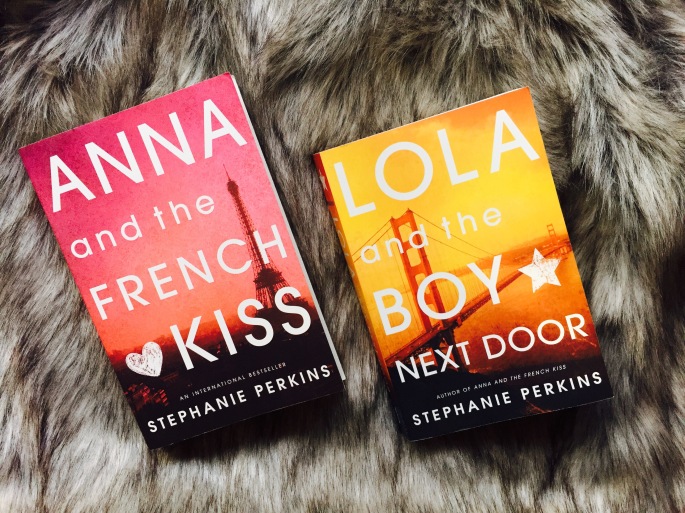 Anna and the French Kiss:

This book came out in 2010 and I think I actually checked it out from the library around that time. I never actually ended up reading it because 1) the original cover was AWFUL and totally cheesy and 2) I thought that the title made it sound like it was going to be a book more targeted towards middle schoolers and at 18 I thought that was a little too young of a target audience. I had completely forgotten about this book until the last several months when I’d seen several book bloggers and youtubers who were around my age absolutely RAVING about the series, going as far as calling it one of their favorites of all time. After hearing this said a few more times by different people, and also seeing that they had completely redesigned the cover art, I decided to give it a shot! And ohmylanta am I glad I did!

This book has everything that you would want in a young adult contemporary novel. There is romance, a love triangle, witty banter and so much drama! Not to mention it took place in the ultra romantic city of Paris, France. The story follows our main character Anna, who gets sent to a French American boarding school for her senior year of high school by her Nicholas Sparks-esque author of a father. He thinks that it will make her more “cultured”, Anna thinks it’s because her father wants the family to appear more cultured to his readers. Apparently culture equals more readership. As it can be guessed, Anna does not want to attend this school and leave all her friends back in Atlanta. When she arrives, she realizes that this school is tiny, there are only about thirty kids in the senior class. She immediately hits it off with campus heartthrob Etienne St. Clair and they become inseparable, but only platonically, much to Anna’s own disappointment. St. Clair has an older girlfriend! Although the chemistry between Anna and St. Clair is absolutely undeniable. I’m not going to reveal anything more since it will for sure ruin the plot. The cast of supporting characters in this novel are also fantastic. There’s artsy Meredith, intimidating and beautiful Rami, and adorkable Josh. While this novel is very much a romance, I really enjoyed how it also focused on the meaning of friendship. One of the biggest messages I drew from this was that you get what you put into something and treat others the way you would like to be treated. These are great moral messages for literally any age. I absolutely adored this book and found myself thinking about it long after I had finished. If you are looking for an easy, happy read, Anna and the French Kiss is the book for you! 5/5 stars

Lola and the Boy Next Door:

This book is the second novel in the series. The story follows wildly eccentric Lola, who is a high school junior living in San Francisco with her two gay dads. Lola grew up next door to the talented and beautiful Bell twins. Calliope Bell is an aspiring Olympic figure skater and one of the most strikingly beautiful girls alive, according to Lola. Her brother Cricket is a talented inventor with a great sense of style (this point is brought up MANY times in the book). Lola has crushed on Cricket ever since she was five years old. When Lola was 14, the Bell twins moved away to help Calliope pursue her skating career, renting out their home to a slew of tenants over the course of two years. Lola and Cricket parted on terrible terms and she claims to hate him with an absolute passion, so when the Bell’s move back next door two years later, Lola is pissed. She informs anyone who will listen that she is completely over Cricket and totally in love with her much older rocker boyfriend. What ensues is drama, drama, drama. There are lots of miscommunications and did I mention drama?

I had a lot of problems with this book. To me, it felt like a total rip off of the first book in the series. Only this time, it was the girl who had the older significant other, instead of the boy lead. In the story, Lola is an aspiring costume designer and is constantly trying to change up her look with wigs and other types of unique clothes. She says that she enjoys doing this and being different, but then makes a huge point of stating how she likes her natural look. It’s as if Lola was trying too hard to be different and it ended up doing off as self-centered and snobby. As if I haven’t made my opinion of Lola clear, I really did not like her, which is unfortunate since she is the narrator. I felt like the book was about two hundred pages too long and really could have been wrapped up a lot quicker. Although I did have issues with this book, there were several aspects I did enjoy. I really loved Andy (one of Anna’s dads) and Cricket. They were multi-dimensional characters that really stood out to me. I also really enjoyed the guest appearances of Anna and Etienne from the first book. It is interesting how they were incorporated into this story but it makes so much sense at the same time. Overall I thought this book was okay. I think I might have liked it more if I had read this first or as a standalone book. However, due to characters appearing in other books, it is necessary to read them in order as to not spoil the other stories. It was just that after reading Anna, I expected this book to be just as good, but unfortunately fell quite short. As I mentioned, I still need to read the last installment in the series, but am taking a little break from it at the moment. Hopefully that one will be much better! 2.5/5 stars