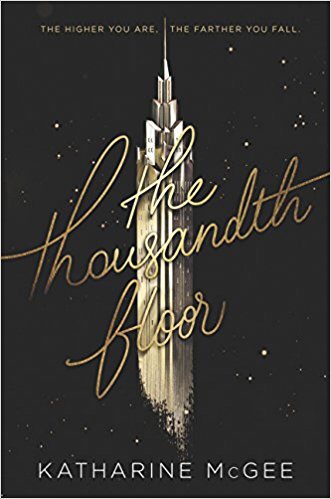 For some odd reason, I have been in a terrible reading slump this Fall. Typically I can pinpoint a reason as to why this happens, but this time I’m truly at a loss. Thankfully, I think that I have finally come out of it after finishing The Thousandth Floor by Katharine McGee. I remember hearing a bit of buzz about it when it first came out last year, but I failed to pick it up based on it’s considerably low Goodreads rating. Although when I saw it on Goodreads “deal of the day” for $2, I couldn’t pass the opportunity up. So, it sat in my Kindle library for months and months until one day in September I just decided to pick it up on a whim. And… I actually am glad I did. While I definitely can see why other’s did not like the book, there were certainly problematic plot points, I very much enjoyed it.

The Thousandth Floor is somewhat of a dystopian Sci-Fi YA novel, taking place in Manhattan 2118. In this future, large portions of New York were destroyed in an unnamed way and so in an attempt to salvage iconic parts of the city, such as Grand Central Station or Central Park, a thousand floor tower was built right in the center of the city. Two miles high and over 32 city blocks wide at its base, the tower houses a majority of NYC’s residents. The higher a person lives in the tower, the higher their socioeconomic status and the lower a person lives, the more impoverished they are. McGee did a great job of setting the scene and making sure to incorporate recognizable parts of the city, but I’d be lying if I didn’t say that a lot of her descriptions of the tower’s interior didn’t confuse me. I had a hard time picturing paved roads and suburban neighborhoods with actual houses with roofs that were located INSIDE another structure. Once I was able to get past my confusion as to how the tower was constructed, I was able to enjoy the story. The technological components that McGee incorporated were actually pretty realistic, but since I though that aspect was one of the cooler parts of the story, I’ll leave you, the reader, to experience what I’m talking about for yourself.

On to the plot! The novel follows five teenagers (also meaning five different perspectives, which can be off putting, but was done well): Avery, the richest and most beautiful girl in all of NYC who lives on the 1000th floor, Leda, an upper floor resident with a nasty drug addiction, Rylin, resident of the 32nd floor who finds herself thrown into the upper’s lifestyle, Eris, a gorgeous girl with a secret that could destroy everything and Watt, a lower floor boy who has the ability to hack anything and everything. Whew. Sorry for the run on sentence there. At the very beginning of the book, you learn that someone, a girl, has fallen off the tower’s roof to her death. The entirety of the book is spent detailing the events that lead up to mystery girls death. It can easily be assumed that it is one of our main character’s who ends up dead, but nearly impossible to figure out who. I definitely spent my time reading, storing clues in my brain for later, trying to figure it out. It is also unknown whether it was a suicide, a murder or an accident. That being said, McGee did an amazing job developing each and every character. Eris, who started out as a relatively unlikeable character, quickly became my favorite due to the amount of depth she was given and her story line proved to be one of the more intriguing. As for Rylin, she was really the only character that fell a bit flat for me. She did not seem to be as developed as the others and her story was a bit boring, although I think it was necessary to set her up for the rest of the series (presuming she is not our mystery girl). The only plot point that  I had an issue with is that there is an incredibly odd, almost incestuous “relationship” between a character and her adopted brother. While yes, they are technically not blood related, it still gave me the creeps.

That being said, overall I really enjoyed this book. It held my interest and kept me entertained. I ordered the second book, which recently came out, and am patiently awaiting its arrival so that I can continue on with the series.