Hello! I’m happy to share that I have finally kicked my reading slump and have finished three books in the past week. All the sunny, warm weather has me in a binge reading mood, so instead of me just babbling about nothing, let’s jump right into the reviews!

A Court of Mist and Fury by Sarah J. Maas 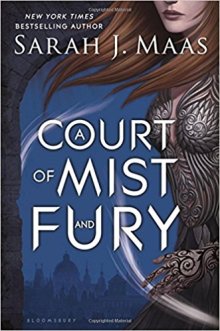 THIS BOOK WAS INCREDIBLE. It was just downright amazing! If you are unfamiliar with this book, it is the sequel to A Court of Thorns and Roses, so I don’t want to include much of a synopsis of ACOMAF in case you have yet to read the first book in the series. Now, let me start off by saying though, that I am really not a huge fan of high fantasy books or series. It really takes something special like Harry Potter to draw me in and make me actually care about the world and it’s characters. With that being said, this series is DEFINITELY something special. I wrote a review on the first book, which I will link here, and I mentioned there that it took me a while to get into that first book. This was due to the fact that the first half just had so much world building, causing the story to progress much slower than I would have liked. In ACOMAF, there is really none of that. It is both plot and character driven and introduces us to a whole new cast of loveable (as well as totally god-awful) characters, while also building more on the characters we got to know in ACOTAR. I loved that ACOMAF had the underlying message of girl power and the importance of asserting one’s independence and standing up for yourself. This book can be found in the Young Adult section of a bookstore or website, although I really do not understand why. There are quite a few very graphic sex scenes as well as graphic violence and depictions of severe emotional abuse. I have the US edition of ACOTAR and the UK edition of ACOMAF. I have noticed that the UK editions actually state on the back of the novel that this series is not suitable for younger readers, while the US editions give no such warning. If you are looking for a fast-paced, entertaining series to occupy your time with, give this one a shot! The third book in the series literally just came out a few weeks ago, and I plan on starting that one very soon. (Had to take a break since ACOMAF emotionally drained me) 5/5 stars 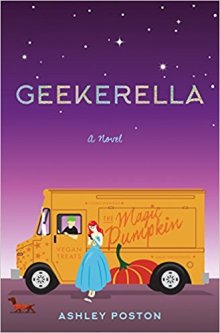 I picked this book up on a whim simply because I thought the cover was cool and Book Depository had it in paperback. I had heard a little bit of buzz surrounding this book the past few months and the only thing I really knew about it was that it was a modern Cinderella retelling involving a Star Trek-esque convention. I personally know nothing about the “fangirl” “cosplay” kind of thing so I really went into this book apprehensive. I was so pleasantly surprised to find that it absolutely did not matter that my knowledge of “cons” was virtually non-existent; this book was incredible! It is a very by the book retelling of Cinderella with a few minor tweaks. The story follows 17 year old orphan Elle, who is stuck living with her awful step-monster and mean girl twin step-sisters in her own parents run down house. Elle’s only connection to her deceased father is her obsession with the cult classic show Starfield, an old space odyssey type show that Elle and her father would reenact and watch reruns together. Her father was well known in the Starfield universe as he was the founder of the biggest fan convention in the South, a convention that Elle has not had the opportunity to attend since her father’s death 7 years prior. When she is not running her blog Stargunner, Elle’s days consist of clipping coupons for the step-monster, fixing leaks in the attic and going to work on a food truck that specializes in vegan pumpkin foods. The other viewpoint of the story comes from 18 year old Hollywood boy-toy Darien, known for his lead role in a teenage drama show somewhat like The O.C. Darien is cast in his dream role of Carmindor, the lead in the new Starfield remake. This casting news makes die hard Stargunners, especially Elle, incredibly angry because Darien is not seen as anything but a pretty face. Little does the world know, Darien is the biggest “fanboy” of them all. What instills is a fun, adorkable contemporary romance that will have you laughing out loud. For anyone who’s familiar with the whole Cinderella story, then yes, this book is quite predictable. Regadless, I found this to be a refreshing read, perfect for summertime. The characters are spectacular and Poston does a phenomenal job at eliciting real feelings of hatred toward Elle’s step-family from the reader. Like, I’m pretty sure I hated this version of the step-monster more than in the original. Read this book, I promise you will enjoy it. 5/5 stars 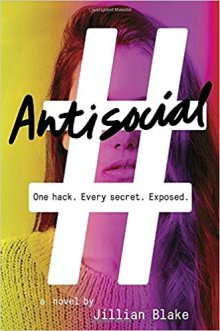 What first drew me in to this book is the fact that it focuses on a main character who suffers from Social Anxiety Disorder, or SAD as it is commonly referred to in the book, and May is mental health awareness month. The premise of the book also drew me in; a hacker starts to release secrets and blackmail on the in-crowd of a prestigious private school, ruining students relationships and futures. The story starts with Anna, the main protagonist, coming back from winter break fresh from a breakup with one of the school’s hottest athletes. During her relationship she had totally abandoned her legitimate friendships in favor of the popular crowd. Already feeling isolated and alone, her SAD only makes this worse. The first bit of this book focuses on Anna and her mending of friendships, then about 20% in, the hacker starts releasing secrets and Anna and her friends must figure out who is behind it all before things escalate even further. Honestly, I don’t want to say anything further about the plot because I went into this book totally blind and I think you should too. What started out as a typical YA suspense novel, turned into something much more, much deeper. I initially thought that this book was going to end up being a low star rating for me, but it really surprised me in a good way! It definitely has a Pretty Little Liars vibe with a Mean Girls twist, especially the way the secrets are spilled is kind of like a higher tech version of a burn book. I took a leap of faith on this book and I’m glad I did. 4/5 stars